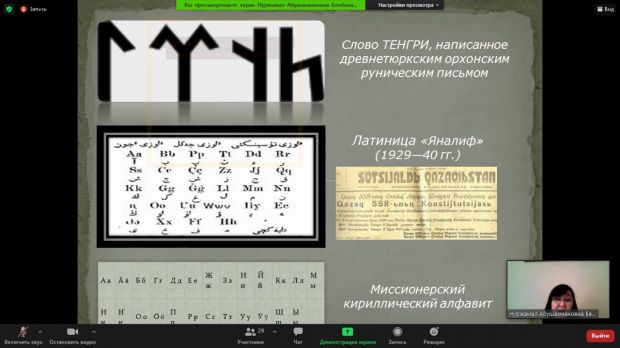 On February 26, 2021 The Languages Development Center ​​of the Karaganda Medical Universitywithin the framework of the state program “Rukhani zhagyru - the way to the future” held the interuniversity scientific and methodological seminar “Latin alipbiine koshu - Kazakh tilinin zhana belesi”.

The event was attended by: the head of the Center of Kazakh Language Development  and Translation into Latin graphics of  NC JSC “Academician E.A. Buketov Karaganda University”, a member of the National Spelling Commission for the translation of Kazakh writing into the Latin alphabet under the Government of the Republic of Kazakhstan, Ph.D., Associate Professor - M.A. Tursynova; the head of the resource language center of the Languages Development Department of ​​the Karaganda Region,  M.P.S. - Zh.R. Zhakanova;  teaching staff of the center, and students of our university.

The relevance and timeliness of this seminar was evidenced by the genuine interest and activity of all seminar participants.